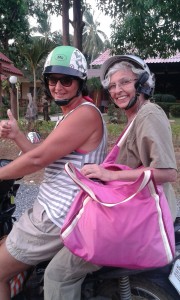 In any case, in my teens our relationship deteriorated to the point where all our interactions were screaming matches and ultimatums (ultimata??). Add to this that I did not get on with my step dad, and you can see why, approaching the end of my high school years, I was just itching to get out of home. And that’s exactly what I did, in the clearest, most unequivocal way: I moved over a thousand miles away (and that was before we had low-cost airlines, so it was REALLY far).

A completely unexpected, and very welcome, result of my moving out and away was that, almost overnight, my relationship with my mother changed beyond recognition. Finally we could relate to each other as adults and not as mother/child, disciplinarian/disciplinee. That happened almost 20 years ago (yikes!) and in the past few years, that relationship has continued to improve, beyond even my wildest expectations. As both my brother and sister have partners (and my brother has children as well) and I have been single for a few years, I am the child who visits home most often, spends time with mamma or even, as it happened recently, invites her on trips.

Two years ago, under major emotional blackmail from me, she came to the UK for a holiday and we visited Stonehenge (something she had always wanted to do but never set out to) and Oxford. It was a lovely few days. So when I decided to go travelling full time, and I mentioned Thailand, mum said “Maybe I’ll come visit you there”. I was surprised that the initiative came from her but was also very glad.

She asked around and found a good friend who was interested in travelling with her, and so we organised this trip of a lifetime. Before coming to Thailand, my mum had never been outside Europe (ops, sorry, she had been to Tunisia), nor on a very long flight, and… to top it all off, she speaks very basic English. So, as befits my OCD Virgoan nature, I planned their trip with military precision: I detailed exactly what they would be encountering on the plane (I explained about the meals, and the wine, very important point, and even told them on which channels they could find movies in Italian), on their stopover in Dubai (shuttle to change terminals, where the smoking lounge was – another key element for my chain-smoking mother), and their arrival in Bangkok (I even took a picture of the arrival card and explained how to fill it out).

So… they made it! We spent a few days in Bangkok and then travelled down to Lanta, where I have been staying. I found them a nice bungalow near the sea and then we went on several day-trips and excursions. We ended up doing things that, I have to be honest, I never thought my mum would do – things she had said she’d NEVER do: ride on the back of my scooter, go on snorkeling trips, eat spicy food. I have to say, it went even better than I expected. They had a great time, got tanned and rested in the middle of European winter, and we spent some quality time together.

I was also really pleased that my mum was with me when she received some very, very sad news. So I was able to comfort her and to try and distract her for a bit.

The whole thing was such a success that we already started talking about next year, and Bali!